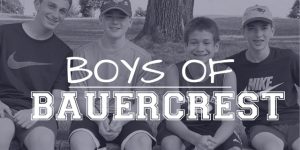 This past summer was the first since 2019 that we were able to open camp to prospective families. We hosted tours, Training Camps, and the occasional pop-ins, allowing us to offer our guests a real taste of life on the Hillside. The energy was palpable and it was AWESOME. As much as I love taking photos, making videos, and talking (and talking) about camp, there’s just nothing better than allowing these families to stand in the middle of the action and take it all in firsthand.

The reason we encourage these visits while camp is in session is simple: While naturally, we want them to be able to see our beautiful facilities and all the amazing activities that happen in and on them, we know that what tells our story better than anything else we have to show for it is our campers. Whether visitors engage in in-depth conversations with our boys or observe them from the sidelines, they see exactly who and what makes us who and what we are.

They’re seeing the 8-year-old laughing hysterically with his bunkmate, even though the bunkmate just struck him out, tagged him out, and threw him out within two-and-a-half innings.

They’re seeing the 10-year-old who slept in a Pull-Up last night, but nobody knows and he plans to keep it that way… despite the fact that he’s in very, very good company.

They’re seeing the 12-year-old who was picked last in P.E. for an entire year give his Color War team a pep talk because the counselor who also used to get picked last saw true leadership potential and made him a Camper Captain.

They’re seeing the 14-year-old who’s about to get cut from his freshman hockey team score six goals in the New Building.

They’re seeing the 16-year-old who’d never really thought about anyone but himself wait tables, then ref a never-ending game of Sophomore Newcombe, sporting a Bauercrest Lifeguard tank not just because it’s “good sty,” but because he’s actually earned it.

What I didn’t realize before

And yet, just because these families are seeing all these things doesn’t mean they’re actually seeing all these things. When I toured Bauercrest with my eight-year-old, I saw boys of all ages who clearly had it all figured out. As if by virtue of them being there and looking even remotely ok, they’d achieved the status of having it all figured out. What I didn’t realize is that figuring it all out is the single most important thing these boys do at camp every day. And the fact that they’re never, ever done is where the magic happens.

Events coming up after the New Year

I’m telling you this because in the off-season, these get-togethers are the next best thing to being at camp. But in full disclosure, as hard as we try to make sure everyone feels included at every event, we understand that it can take time for prospective campers to feel comfortable when they’re with a bunch of campers who’ve known each other for years. Especially when those campers haven’t seen each other in months. It’s an all-out lovefest, and it’s hard to watch your child not be a part of that.

If only you could picture your boys after a few weeks on the Hillside, smack dab in the middle of that lovefest, so many of your worries would be erased. But the reality is, there’s only one way to feel a part of it all… and that’s by actually being a part of it all.