At the beginning of the summer, someone asked my son Jaden to name his very favorite thing at camp.  Without hesitation, he responded with an emphatic “COLOR WAR.”  This is a common answer among our campers; they look forward to it— and chant for it— from the moment they arrive on the Hillside.  What struck me about it coming from my child is that until this year, he had never even been here for second session (see/hear “Re-Entry” blog post).  Which means he had never done Color War.  Of all the things he loved most about camp, something he had never experienced was at the very top of his list.  I worried that it would disappoint.  IT DID NOT.

The build-up in the days leading up to the break of Color War was some of the best fun I’ve ever had.  And the actual break… pure, unadulterated bliss.  I was able to capture a bit of it on video.  I am embarrassed to say I’ve watched it more times in the last 4 days than I have watched my wedding video in the last 12 years.  I can’t stop.  I keep wanting to relive it.  I gaze out my window from the second floor of the Big House onto a sea of blue and white, and it is magnificent. 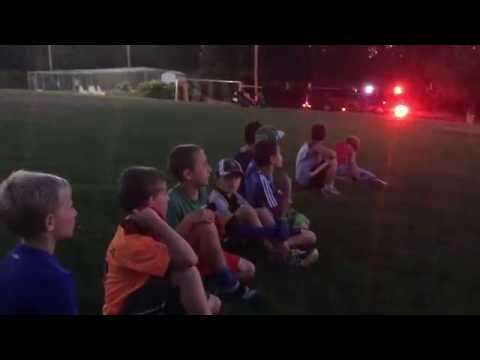 But there’s a dark side of Color War as well…  the realization that in less than a week, this Hillside will once again be empty.  No more t-shirts and baseball hats lying on the field, right where the boys decided they were too hot to wear them for one more second.  No more towels and bathingsuits hanging on the lines.  It will be eerily quiet.  For the first time all summer, I will not be able to get out of here fast enough.

Last summer, I was on a committee to help plan the camp’s 85th anniversary celebration happening that fall.  I hosted several of the meetings at my house.  My kids were home from camp against their will (again, see/hear “Re-Entry” blog post), camp was still in session, and being around camp people— especially Joanna— was sheer torture for them.  When Joanna arrived at my house, she told the boys she’d brought them each a gift; this perked them up ever-so-slightly.  Then she handed each of them a little jar.  It might as well have been filled with buried treasure.  Actually, to them, that’s exactly what it was.  I will never forget this act of kindness… a perfect reminder that it’s the little things that matter most.

I have spoken with the parents of some of our campers who’ve gone home this session.  Lots of emotional ups and downs.  It makes sense when you stop and think about it.  There aren’t too many gifts you can give your children… at least during their actual childhoods… that compare with the gift of sending them to camp.  It’s a gift they hold onto with everything they have.  And yet, no matter how tight the grip, they knows they will have to give it back at the end of the summer.  It’s an amazing, beautiful, somewhat messy life lesson.  Camp is filled with these.  We might not be able to store them in adorable little jars, but we don’t have to.  Your boys are coming home with them anyway.  (After what I’ve seen in Lost & Found, hopefully this makes up for what they don’t come home with.)

Thank you again for sharing your sons with us this summer.  We’ll see you Thursday.