July 9, 2016|Stacy Pollack|Comments Off on Reflections on Mini Camp

Whenever Joanna and I are going over the camp calendar and we get to the last week— and then the last day— of camp, her eyes well up and she can barely speak. I have learned from her, as well as from my kids, that on the last morning of camp, we play Taps instead of Reveille. That it’s the quietest day of the entire summer. That except for the crying, you could hear a pin drop. Most of us here are still experiencing what we would consider “the beginning of camp,” but tomorrow is our first “last.” Mini Camp is over. And I miss these boys already.

We introduced Mini Camp this summer with the intention of bringing in new kids to experience Bauercrest for the first 10 days of camp. If we’re being honest, I’ve had mixed feelings about this program from the start. I know that there are kids on this Hillside right now who probably wouldn’t be here if it weren’t for this very abbreviated session. We’ve got kids who weren’t sure they were ready for the overnight camp experience, and kids whose parents weren’t sure they were ready to let their sons go. But on the flip side, there is still so much camp left to come, and they’ve only just gotten a tiny taste. By the time they’re really used to the routine and to each other— which is happening, oh, right about now— it’s time to leave. So while we are so grateful to have had these Mini Campers for 10 unforgettable days, we are now left with a hillside full of campers and staff who are nowhere near ready to let them go.

Almost every Mini-Camper struggled with the decision of whether or not to extend. I have spoken to every single one of them about how much they love camp. I have also spoken to many of those same kids about how much they miss their families. I’d point out that it’s pretty awesome to want to be in two places at once, and they’d look at me like I was crazy. Because the reality is, you can’t. You have to choose. And that’s a very big choice for a little boy to have to make. So no matter how much they love camp and how desperately they know they’re going to miss it, the majority will choose what they miss the most at that very moment. And what they miss the most when they’re here is you.

When our oldest son came to Bauercrest for the first time, he was signed up for two weeks with the option to extend. I had promised myself not to allow his decision to mean something it didn’t. He was 8 years old, and he had never even slept at a friend’s house before coming to camp; that he’d gone at all was a win in and of itself. He perseverated for days; I couldn’t get an answer. He ultimately decided he was ready to come home after the two weeks, and that he’d definitely be back for the full session the following summer. It was all good. When we picked him up, he talked a mile a minute about all of his amazing experiences. We had never seen him so animated. We weren’t on the road for even half an hour when he started to cry that he wanted to go back. He had needed to see us; and as soon as he did, just like that, he was over it. We didn’t bring him back. He went to day camp like we’d planned. It didn’t compare. It didn’t even come close. After seeing what I’ve seen these past 10 days, I’m pretty sure nothing ever will.

So our Mini Camp parents will get their boys back tomorrow, and a new group of campers will be descending upon the Hillside. To the naked eye, camp will look exactly the same… boys everywhere… in the bunks, in the water, on the fields, on the courts, in the Mess Hall. But please know that to us, it’s not the same. Not one of them will replace your sons and what they’ve meant to us this summer.

Following is Dan Stephen’s amazing sermon from services this morning…

If you are picking up your son tomorrow and are wondering about tipping, I know we say that $10/week/counselor is the standard, but for Mini Camp, I think it’s more in the $20/week/counselor range. Of course this is a personal choice; but since we’ve had inquiries from so many families, I thought I’d put it out there.

Finally, the entire camp joined together to make this video earlier in the week. Should your sons have a hard time explaining what camp’s all about, this pretty much sums it up. Enjoy! 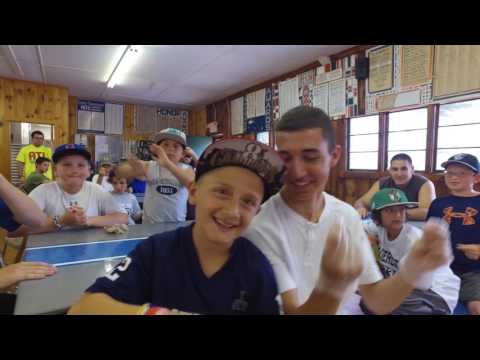